The European Union and Global Governance 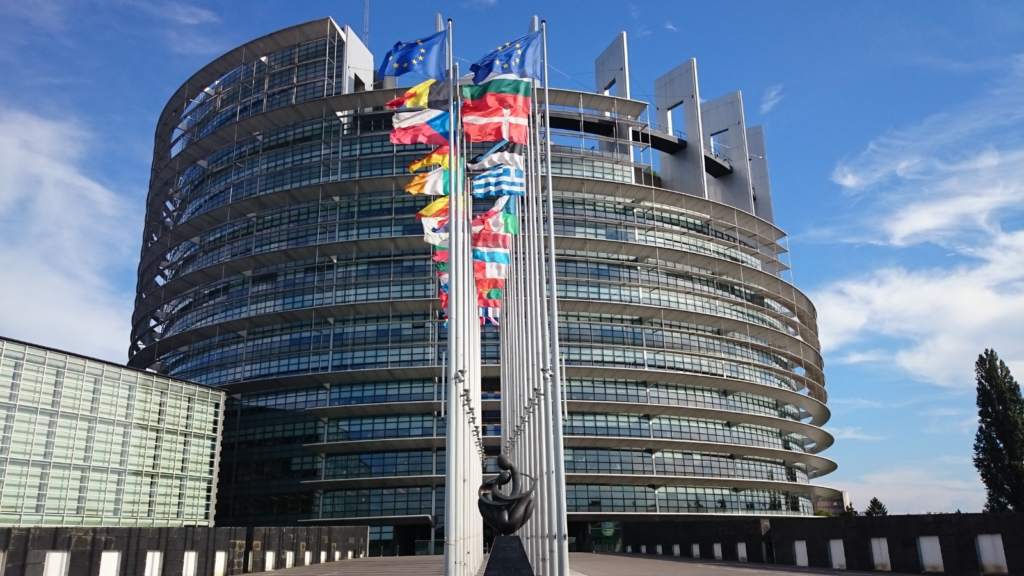 This article first appeared on Social Europe on 13 April 2021.

The EU’s strategic ambition must not be just to carve out a niche for itself among the major powers but to reshape global governance.

With a conference in February organised by the European Union Institute for Security Studies and the Portuguese presidency, the EU launched a public discussion of the main objectives for its foreign policy and the means for their realisation. The resulting ‘Strategic Compass’ is expected to be adopted in the first half of 2022.

Effective political subjects must unite behind a standard—as with the United States and the Soviet Union at the end of the first world war, when the former set out to build a world ‘safe for democracy’ while the latter spearheaded a global socialist revolution. If the EU merely sets out to navigate the vast ocean represented by the old post-war international order, based on the Westphalian system, it will remain under the sway of the other world powers.

This is borne out by the first comments on the Strategic Compass—more focused on ways to survive than on building a peaceful future for Europe’s citizens and those of the rest of the world. European foreign policy should not transform the EU into a superpower but rather cauterise the conflicts between the major powers.

And if foreign policy is focused on military means, we shall continue to be faced with the choice between peace and war, us and them, friends and enemies. Nationalism is the inevitable ideological complement of a politics based on military force.

International politics is no longer governed by the two former superpowers. The bipolar world order is over and in its place a multipolar system is haphazardly emerging, with major new players—such as China, India, Brazil and Australia—coming on to the scene.

The old powers however continue to act as Westphalian sovereign states: they view the others as potential enemies but are forced to keep any conflicts low-key, so as not to undermine the global system of production and circulation of goods, services and people on which all depend. The alternative to today’s globalised economy is isolation and poverty (think North Korea).

The pandemic has brought this contradiction to the fore: consolidated human and economic bonds have prevailed over vaccine nationalism, as evidenced by the intense international scientific and technological co-operation involved in developing and distributing the vaccines, now seen as a common good of humanity. Ultimately, although the goal of peaceful international co-operation is being challenged by sovereigntist world leaders—such as (formerly) Donald Trump, Vladimir Putin and Jair Bolsonaro, though not Xi Jinping—the global economic system survives. This remains however in perpetual uncertainty, amid verbal friction and stilted prose at global summits, which the various states see more as an opportunity to flex their muscles for the benefit of their own citizens than to tackle the global threats to peace and the environment.

Given that the balance of power of the multipolar system thus oscillates dangerously between co-operation and conflict, with rival powers—mainly the US, China and Russia—jockeying for global dominance, the EU must carve out a specific role of its own. It will not be easy. As its high representative for foreign affairs and security policy, Josep Borrell, recently pointed out, ‘The weight of Europe is shrinking. Thirty years ago, we represented a quarter of the world’s wealth. It is foreseen that in 20 years, we will not represent more than 11%  of world GNP, far behind China which will represent double that, below the 14% of the United States and on a par with India.’ A Europe that remains resigned and incapable of taking action will soon turn into a global Switzerland, subordinate to the major powers.

The union therefore stands at an existential crossroads. If it wants to weigh in as a world power on an equal footing with the others (including, in the future, India), it must equip itself with military weapons worthy of a great technological power, including nuclear weapons, and accept the ideology of nationalism—in short become the European ‘nation-state’. Or else, while not giving up on the idea of having its own military force, in line with its principle of ‘strategic autonomy’ it must strive to play a unifying role, in the construction of a peaceful international order.

The EU has the power to sedate the aspirations to dominance of the great powers. By championing a multilateral approach it can foster the equal participation of all states in the handling of common affairs, in the quest for solutions to the pressing issues facing our planet: the climate crisis, economic convergence between rich and poor countries, a fair system of commercial relations and the reining in of international finance—now so powerful that it represents a threat to the independence and stability of all the world’s states.

This strategic objective can be termed global governance—a peaceful, co-operative, post-Westphalian order, based essentially on the international institutions created by the US after the second world war but with the adjustments necessary to replace US dominance by a system of equal participation of all states in the management of global interdependence. It would represent a genuinely peaceful and now multipolar coexistence.

The EU was forged by peoples who, after World War II, said ‘never again’. Now the time has come to extend the Europeans’ commitment to peace—as enshrined in the creation of European citizenship and the Charter of Fundamental Rights—to the rest of the world.

This point of view differs from the proposal formulated by Richard Haas and Charles Kupchan for a ‘new concert of powers’, a sort of latter-day Council of Vienna. Their aim is to preserve the equilibrium of the Westphalian system, rather than to forge a post-Westphalian order.

Take the question of the North Atlantic Treaty Organization and European defence, where ‘strategic autonomy’ appears to give rise to an impossible dilemma: either we go along with directives from NATO, formulated by the strongest military power, or we question its very existence, because a ‘western’ military alliance should not be counterposed to peaceful global governance. The proposal by the secretary general, Jens Stoltenberg, to extend NATO into Asia—taking in Australia, New Zealand, Japan and South Korea as ‘contact countries’—is an attempt to contain Chinese expansionism using European military means. The US president, Joe Biden, recently proposed a summit of democracies and, with regard to Asia, attended another round of the ‘Quad’, the Quadrilateral Security Dialogue between the US, Japan, India and Australia.

Neither an alliance of democracies against China nor a Euro-Asian NATO is aligned with European interests and perspectives. If the EU wants to initiate a policy of world pacification it has to change the meaning and contents of a military alliance established during the cold war to contain Soviet expansionism.

European governments should remember that in 1994 they convinced the then US president, Bill Clinton, to give Russia the opportunity to participate in the Partnership for Peace (PfP) with NATO, thus launching an opportunity for economic co-operation between Russia and European countries, with a view to full participation in NATO. Unfortunately, NATO’s policy of eastward expansion triggered a crisis with Ukraine, disputed between east and west, and Russia, which now appears an irreconcilable rift.

Yet article 2 of the North Atlantic Treaty states that, alongside military co-operation, economic collaboration between allies is to be encouraged. The EU could therefore propose a vast free-trade area, from Vancouver to Vladivostok, involving Russia in a project for economic co-operation (as with the PfP) which in the long run could lead to lasting political-military detente. Russia is facing serious economic problems and energy-related issues and would no doubt be interested in peaceful economic co-operation that would improve the wellbeing of its citizens, as well as relations with China and the other countries in the Euro-Asian area.

To date, lack of an effective European foreign policy has instead allowed Russia and Turkey to extend their influence into the countries of the Caucasus. Establishing a wide free-trade zone would show that there is a pacification process under way among major powers, the beneficial effects of which would be felt throughout the Mediterranean area.

Consider too the Glasgow climate conference, COP26, in November. This could represent an opportunity to show that all countries are committed to averting ecological catastrophe, which science bleakly predicts if the 2015 Paris agreement is not respected. The rising average global temperature is already having devastating consequences, from melting polar ice to forest fires, cataclysmic storms and the extinction of countless animal species.

One of the aims in Glasgow will be an agreement that establishes targets for reducing carbon-dioxide emissions for each country. This could be accompanied by a policy for the provision of global public goods—a global Green Deal which, in addition to measures to contain pollution, would include initiatives for more effective solidarity between countries, rich and poor in particular. The EU has already added the Next Generation EU plan to the European Green Deal.

European leaders have launched a proposal which can be viewed as a first step towards global governance. Together with the United Nations secretary general, Antonio Guterres, and the chair of the African Union, Macky Sall, Emmanuel Macron, Angela Merkel, Charles Michel and Ursula von der Leyen have said they are in favour of an extraordinary issue of Special Drawing Rights (SDRs) by the International Monetary Fund, to overcome the pandemic crisis and fight global warming. For the time being this proposal remains vague, but it could represent a genuine breakthrough in international co-operation.

Normally, only one third of SDRs are allocated to emerging countries. In an emergency, the entire issue could be assigned to the UN to set up an extraordinary fund, part of which could be used to fund a global health system, as recommended by the Pan-European Commission on Health and Sustainable Development, with the rest allocated to a Global Green Deal, to fund research into renewable energy and mitigation measures for poor countries. The citizens of the world would then understand that international solidarity can be translated into effective policies.

Given that SDRs are based on a basket of currencies—which includes the dollar, the euro, the yen, the renminbi and sterling—creation of an extraordinary fund for the UN would represent a key step towards global governance. The major world powers (the ruble as yet excluded) could begin to co-operate openly on a plan to recover from the pandemic and save the planet from environmental collapse. Extensive use of SDRs, a sort of world currency—in lieu of the bancor john Maynard Keynes unsuccessfully advocated at Bretton Woods in 1944—would help stabilise the international monetary and financial system, now dominated by a vast flow of stateless capital.

Moreover, other continental unions, such as the AU, could begin to use SDRs as a currency of account, to stabilise their internal markets and particpate in international trade without fear of monetary and financial storms. A closer relationship between the EU and the AU would represent a model of transcontinental co-operation for equitable and sustainable development.

Policies designed to forge global governance would not only produce substantial economic and social fruits but would also promote peaceful co-operation among the major powers. World leaders must not pursue short-term gains for their citizens at the expense of the planet’s other inhabitants.

European citizens know that a war between EU member states is impossible today. If steady progress towards global governance is made, the day will come when there will no longer be physical, ideological or political barriers separating the citizens of the world.

Guido Montani is professor of international political economy at the University of Pavia. He is a former president of the European Federalist Movement in Italy. He is editor of The Ventotene Lighthouse: a Federalist Journal for World Citizenship.