Home > New World Federalist Papers > This tangled web we have woven: why countries go to war

This tangled web we have woven: why countries go to war 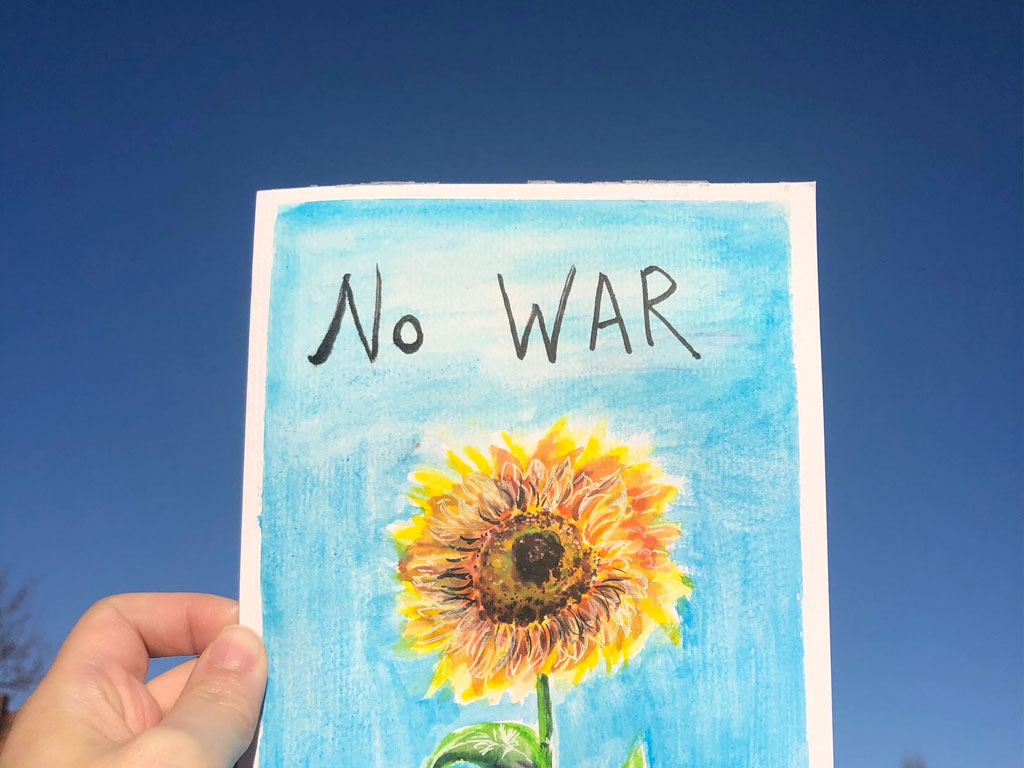 Some countries have gone to war with initial overt aims of improving their economic status by eliminating the opposition or occupying territory that brings enhanced wealth through its agriculture, industry and infrastructure. What is axiomatic, however, is that all wars are won on economic grounds – in anything other than a very short conflict the winner is the country or alliance which can organise its manufacture on a war footing, produce more lethal material than its opponent and sustain its own population through the crisis.

The madness of Hitler in declaring war on the United States (even though, already at war with Japan, it was probable that it would have been drawn into the European war – but with no certainty taking account of American isolationism and the desire not to be engaged in another European war after WWI) was that he faced an economy that could mass produce war material and had the wealth to sustain it. On the other hand, Germany, notwithstanding the efforts of Speer when he became Armaments Minister to simplify production, produced a vast array of different weapons all requiring individual attention and, without access to the rich oilfields of the East, just ran out of steam.

The American Civil War bankrupted the South: “The Union’s industrial and economic capacity soared during the war as the North continued its rapid industrialization to suppress the rebellion. In the South, a smaller industrial base, fewer rail lines, and an agricultural economy based upon slave labor made mobilization of resources more difficult. As the war dragged on, the Union’s advantages in factories, railroads, and manpower put the Confederacy at a great disadvantage” (Benjamin T. Arrington, National Park Service). It is arguable that Lee was the superior general on both sides (indeed, Lincoln had offered him supreme command of the Union forces) but he did not have the resources (“In the East, General Ulysses S. Grant threw men and materiel at Robert E. Lee’s depleted and increasingly desperate army. Grant took advantage of railroad lines and new, improved steamships to move his soldiers and had a seemingly endless supply of troops, supplies, weapons, and materials to dedicate to crushing Lee’s often ill-fed, ill-clad, and undermanned army”).

This premise is not universally true – for reasons too detailed to set out in this piece France did not emerge from the Napoleonic Wars in a state of economic collapse. Nevertheless, we should recall that the great colonising powers did not conquer foreign lands in order to spread beneficial culture and civilisation, whatever the spin-offs may have been, but to exploit, extract and purloin the natural and accumulated resources of those countries they subjugated: conquest has mostly been for economic reasons.

Is Ukraine any different? First, as is now obvious and will become even more apparent in the months and years to come (heaven forbid that it should last that long) Ukraine is the breadbasket of Europe producing wheat and flour which are essentials not just for European countries but also Africa and other. Already we are seeing a shortage of cooking oil and shortage of other necessities will follow. Putin has managed not only to arrest globalisation and make importers think of their supply lines and sources of materials and required resources such as energy but also is now condemning many on subsistence in the poorest parts of the world to the prospect of starvation. What is less widely known is that Ukraine has access to 21 of the 30 raw materials considered critical to the EU including lithium, cobalt and manganese. In an attempt to reduce its almost total reliance on China for these materials (without which there will be no electric vehicles, wind turbines and telecoms) the EU engaged last year on a strategic partnership with Ukraine. The current war has now pushed it back into the arms of China. Paul Atherley, Chairman of Pensana Rare Earths, is quoted in the Daily Telegraph as stating “Everthing depends on magnets. The whole world will stop without them.” So, apart from the pivotal importance of Ukraine geo-politically as a buffer between Western Europe, the EU, NATO and Russia this war is critical to global technological development as well as sealing the fate of millions of the world’s poorest citizens.

The stakes are high

The stakes could not be higher! It is small wonder, therefore, that political leaders in the EU and USA repeatedly assert that the Ukrainians are fighting on behalf of us all for freedom, territorial integrity of nations and the world as we know it. Against this is Putin’s unshakeable belief (set out in writing last year in a selective interpretation of the history of Ukraine) that the country he has invaded is an integral part of Russia whose independence has never been accepted. That is reinforced by his limited understanding of the reality of what is happening, the surprise nature and extent of Ukrainian resistance, the equally unexpected failure of the Russian military and the competence of its forces and his, no doubt reinforced, view that this is a war (sorry, limited intervention) between Russia and NATO. He is mercurial and now deeply unpredictable. As the Economist points out in its newsletter of 1 May “A vulnerable nuclear-armed power, after all, might be more scary than a self-confident, well-run one. Mr Putin has various options for extending his conflict. One threat is in Transnistria. Another possibility is that Mr Putin could declare full-scale war in Ukraine, calling for a general mobilisation of men to join the Russian army. It seems the world had better get used to the idea of conflict in Ukraine being one for the long haul, with all the military, economic, humanitarian and other consequences that entails.”

If, like Afghanistan and Chechenya, this war drags on for months or (in both cases) years with the Ukrainians, backed by Western weapons, conducting both regular and irregular war against the Russians seeking to dislodge them not only from the Donbas and Mariupol but also Crimea how will it pan out? Will the West become bored with supporting a continuing conflict and lessen sanctions. Frankly, I doubt it – too much has already been invested and, although the rapid withdrawal from Afghanistan sets a dangerous precedent of how a change in US Administration could set a fresh agenda and maybe seek to put pressure on Ukraine to accept the status quo in the Donbas and the Crimean corridor, the European countries on the front line with Russia are unlikely to agree. Putin has shown his hand too overtly (with chilling similarities to the way in which Hitler played the other European countries, including Russia) for the lesson to be ignored. Today may be Ukraine but tomorrow is Finland, the corridor to Kaliningrad through NATO territory (the Suwalki corridor or Suwalki Gap which separates the Russian exclave of Kaliningrad on the Baltic Sea from Belarus) until a Greater Russia has been restored. If, of course, the latter were to occur then that is war with NATO which will come to the defence of Lithuania and Poland – both of which have cause for historic reasons to fear and loathe the Russians.

Would Putin be motivated by the fear of NATO becoming directly involved in a war? All sensible Western analysts deem this illogical and too dangerous – but that is to impute Western logic into our adversary. A miscalculation of the intentions and true state of mind of a military opponent has been the casus belli in many previous conflicts – perhaps most notably in WWI with the actions of Kaiser Wilhelm II.  Putin does not think in Western logical terms but in those of an encircled creature, whose country he regards as geographically eroded, underestimated and disrespected desperately needing and deserving of a better status. It is entirely possible that he may come to the same fateful conclusion that Kaiser Bill also made – that further delay will lead only to further erosion of Russian territory and influence (with the Kaiser it was whether Britain would overtake Germany in the development of its fleet) and decide that it is better to have that war now rather than later when it may be too late for Russia.

There is one other unknown factor. Is Putin seriously ill and knows that he has limited time to make his indelible mark on Russian history?  Several publications have pointed to his puffy face (use of steroids?), his gripping of the table as being a very different man who first became leader over twenty years ago. The Parkinson’s theory was sparked in November 2020 when political analyst Professor Valery Solovei cited Kremlin sources when he claimed tyrant Vladimir Putin is suffering both thyroid cancer and Parkinson’s. The Mirror newspaper at the end of April referred to a video in which he is seen holding one hand to his chest while the other is in a fist, fuelling concerns he may have Parkinson’s.Later in the footage the 69-year-old greets Belarusian President Alexander Lukashenko and seems unsteady on his feet while his thumb seems to suffer a spasm.Visegrad24, which first published the footage online, said it was “probably the clearest video of something being wrong with Putin’s health”, according to the Daily Express.  It is perhaps ironic that Hitler almost certainly had had post-encephalitic Parkinsonism and in the last known footage of him inspecting a group of Hitler youth his left hand is shaking uncontrollably.

It is for all these reasons that we have to wake up to think the unthinkable and to prepare accordingly.

Returning to my theme of economics driving warfare and constituting its consequences one thing is certain: that as long as Putin remains President Russia will be treated like a pariah and never trusted again. It is not just the illegal invasion, war crimes and breaches of humanitarian law but also the threat to discontinue supplies of energy to Bulgaria and Poland (both, incidentally, well prepared for this), the unlawful seizure of 500 aircraft belonging to others (worth some $10bn), the weaponization of trade, the preparedness to wreak poverty and havoc on nations that have no direct involvement in Ukraine. He has demonstrated that no commercial deal and no words of assurance are worth anything and can be ripped up unilaterally by the Kremlin. Who would trade with such a partner? The big companies like BP and Shell are moving out, we shall see an embargo on Russian oil and, eventually, on its gas leaving these supplies unsaleable (even if it takes a couple of years for Europe to find other suppliers). Even China, despite its assertion of undying solidarity with its autocratic neighbour, is now getting cold feet. It will not take much for China to decide that the risks of doing business with Russia are just too great for its own good and Putin’s gamble of putting his eggs into the Chinese basket (especially as an alternative customer for gas and oil) will have failed and leave Russia even more isolated.

It is possible, of course, under such a stimulus as sanctions bite deeper and Russian people suffer even more in real terms and not just the visibility of seeing global brands disappear from their midst that we could see another Russian revolution, another glasnost and a change at the top – but do not count on it. Putin is firmly entrenched, surrounded by fawning acolytes, distanced from reality and safeguarded in the way that only paranoid dictators know. Yet, all dictators fall or succumb – if the speculation above as to his health is correct it may be divine intervention that finally closes the chapter on this terrible period of Russian history.